Staff member
So this is now turning into a rather major update, but due to the lack of cross-platform code changes we're continuing to call it 3.2.13. The Screen Reader feature turned out way better than I expected - one of the most satisfying things we've ever done on Android, as a matter of fact.

If you previously signed up for beta testing through Google Play, this new beta should show up as an update within a few hours. Otherwise, you can get it:

a) Through Google Play. Sign up for our Android Beta Testing group at:

And then sign up for beta versions of Pleco at:

after which you should be able to get it right from them.

There's sadly no way to do anything like Screen Reader or Screen OCR on iOS at the moment - Apple doesn't allow third party accessibility readers or screen capture apps, and given the horrendous security implications of somebody making a malicious one I'm not sure that's such a bad idea. But we are working on a Share Extension for iOS 9, so you'll be able to pull up text in a popup Pleco dictionary or document reader via the new system copy menu "Share" command rather quickly via that at least.

Nice! Screen reader is much better user experience than I expected!
- I don't know if it makes sense, but how about not showing blocks which only contains english words?
- I often see a huge web view block covering the whole screen.
- Volume buttons don't work when in screen reader.
Last edited: Jul 15, 2015

Limiting to Chinese only is certainly possible, yes - we had English on for the sake of debugging but we're not sure if it makes sense to keep it in the release app since it does tend to add to the clutter a bit and you can see the actual English underneath anyway.

The web view blocks are hard to work around - basically Chrome has a bit of an issue with overlapping regions, instead of showing text precisely where it is on the screen it'll often stretch it to cover a considerably larger area, or if for example a link wraps between two lines it'll create a box that encompasses both the end of one line and the start of the next and tell us that the text appears in that giant box. So our best workaround at the moment is to simply merge the text (we do know the reading order) when we're confronted with a complicated set of overlapping boxes like that. We're probably still going to bring Web Reader to Android in the not-too-distant future so we're not hugely worried about getting Chrome working perfectly but we'd certainly like to do better if we can.

Good note on volume buttons, we have to take over all of the hardware buttons in order to intercept back button presses but we probably need more code to send other button presses back to the system when we don't use them.
B

I notice that in wechat when I use screen reader on a really long message, the layout doesn't match. I think the screen reader try to fit the whole message in one screen. It makes the text really small.

Staff member
Hmm... which Android version are you using? Newer iterations of accessibility tend to do a better job with confining text to what's visible on the screen. We may want to consider making fields scrollable in some cases though, or trying to figure out what portion of the box is actually visible and truncating the text based on that.
Last edited: Jul 15, 2015
B

Staff member
Interesting - might make sense to have a floating 'bring this up in a scrolling reader window' button for these cases.

Pleco seems to be slower a little bit everywhere.

Staff member
Sorry for the confusion. You actually want to enable just one option under Accessibility - "Pleco Screen Reader"; everything else should stay at whatever it was before. Those other options may be part of the reason for the slowdown.

With that option in Accessibility enabled, go back into Pleco and choose the "Screen Reader" option and it should then work correctly.

We neglected to automatically turn on Screen Reader after you enable the accessibility service from that prompt but we've already fixed that for Beta 3.
Last edited: Jul 15, 2015

As I have a german version of Android, the only place where I find Pleco Screen Reader is "Eingabehilfe/Dienste" (whatever that is in english, it could be something like "Input Support/Service"). But as I wrote: I cannot activate this service (which is marked Off), because then I am asked: You want to use Pleco Screen Reader? And OK leads to the question above with the TTS and the system language.

Staff member
With Chrome, try it a few times, waiting a few seconds between each - does it behave better then? Chrome can sometimes take a little time to populate its accessibility data.

With the editor, what app was this? It might simply not support accessibility.

With Chrome I had many tries, but I always got empty rectangles.

Staff member
Sorry, so are all of the accessibility options turned off now besides Pleco? Or are some still enabled? I'm trying to reproduce your problem here but haven't had any luck so far - Chrome and Gmail should definitely work at least.

Are we suppose to have access to the MoEDict in this Beta? I'm having trouble finding it.

Staff member
No, still working on that one - hopefully in Beta 3.

mikelove said:
Sorry, so are all of the accessibility options turned off now besides Pleco? Or are some still enabled? I'm trying to reproduce your problem here but haven't had any luck so far - Chrome and Gmail should definitely work at least.
Click to expand...

I turned off all options. I still cannot see any text in the rectangles, but if I tap in the empty rectangle, a dictionary like in Pleco File Reader is opened, and the tapped text is visible. I can scroll through the invisible text with the cursor. After some scrolling through the dictionaries Pleco crashed, and I had to shut off the tablet, because the Report/OK buttons were inaccessible. 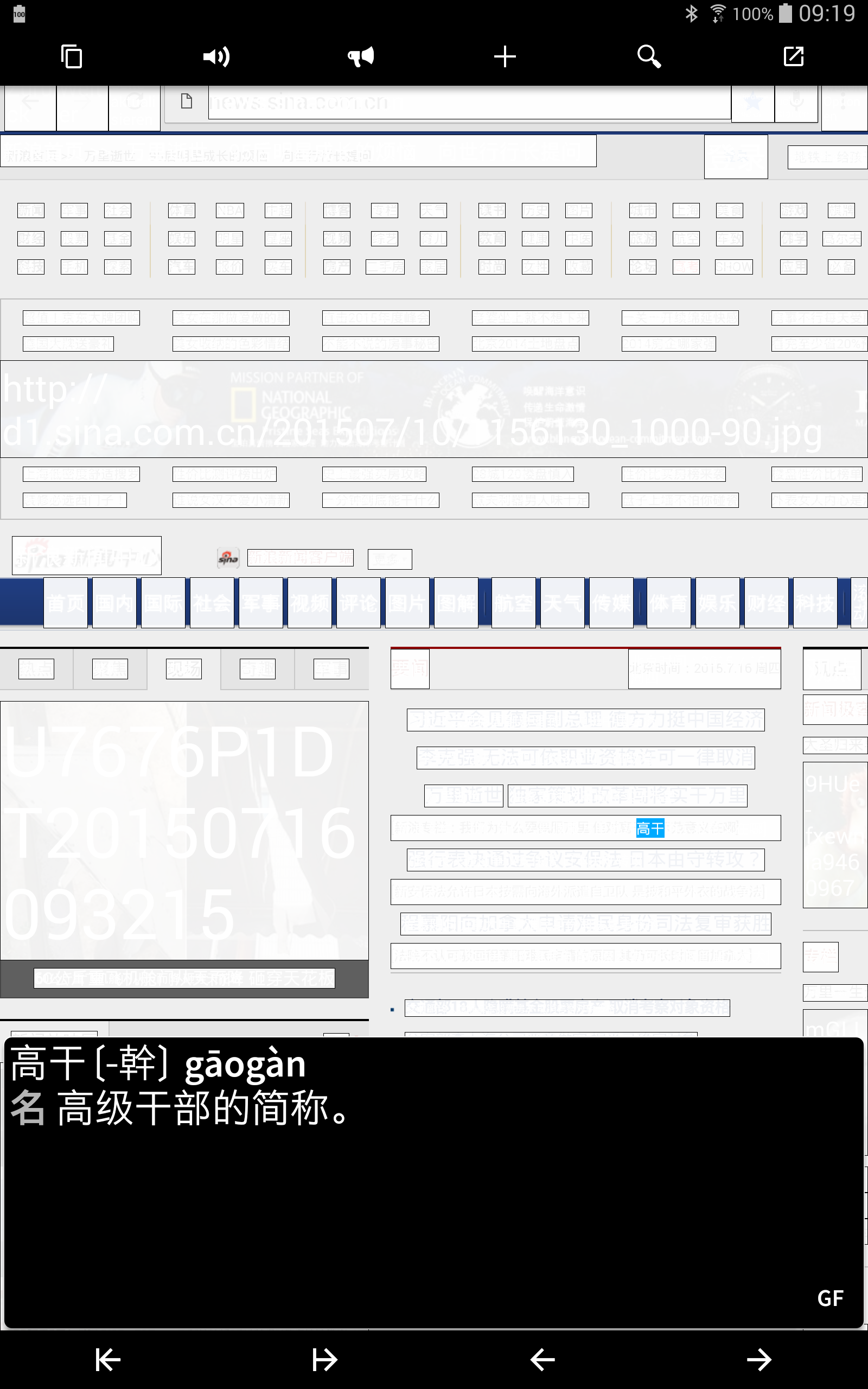 I use night mode with Pleco. In day mode the text is readable.