Hi, I was wondering about an issue I encountered. I assumed - as most users I think - that the characters shown in brackets after a main entry are their traditional equivalent (or viceversa, if Pleco is set to traditional). While this is generally true, for some characters the traditional is an earlier variant of some sort. For example, 与〔與〕is simplified/traditional, but 决 (決) is not. So I was wondering how Pleco deals with this, since older variants and traditional characters that have been officially simplified seem to be displayed in the same way.

that's a good point. While I'm not up to date on whether in Taiwan or Hong Kong, 决 is now being used exclusively instead of 決, I can see that about 14 of my dictionaries all agree that one can write either 决 or 決 in Traditional. So both forms seem to be acceptable in Traditional. The dictionaries say:

Thank you for your feedback. However, at least in my version of Pleco, the entry for 决 is displayed as in the picture:

Wouldn't this mean that 決 is the traditional equivalent rather than an earlier variant? (this character was not part of the 1964 reform).

Is my understanding correct, that both earlier variants and traditional characters are shown in brackets, while variants still in use are separated by a slash?

You're welcome! Your screenshot made me look again, and I found that almost all dictionaries just give 決 as the Traditional reading that's in use today, only the Oxford Chinese Dictionary offers both 決 or 决 for Traditional. Also the pinyin keyboard input on my Mac suggests 決 if I enter "jue" in the Traditional input mode. So, are you really positive that in the 1964 reform, the 決 writing was replaced by 决 such that all text written after 1964 would have to be written with 决 to be grammatical?

I also googled for "我決定" (using the two dots) and got over 20 million hits, most of them were written with 決, and all pages from Taiwan I saw used two dots on the 決. This would also indicate that 決 is still in use today in Traditional script.

In any case, almost all dictionaries available for Pleco aim to reflect current usage. As far as I'm aware, earlier variants only make inroads into the Outlier dictionaries for educational purposes.
C

Actually, I meant quite the opposite. There is no trace of 决 in the reforms, so my understanding is that, although not present in the reforms, 決 is used in traditional and 决 in simplified. What I was wondering is that Pleco (and probably most - if not all - dictionaries) make no differentiation in displaying variants or traditional/simplified pairs: thay are both between brackets.

And a second question arises, how does Pleco use brackets, versus slashes to separate characters? They both seem to have the function of indicating a variant form.

In this screenshot from the manual, you can find a headword with a slash in it, because 笔画 can also be written as 笔划. So that would be variant form. In parentheses, you find the Traditional counterpart of the Simplified headword, and it is probably just adapted from Simplified.

I doubt that most dictionaries are precise enough to keep track of differences in the present-day use of variants between Simplified and Traditional script. I suspect that they take the variants from Simplified and simply translate them over to the Traditional character set. But they clearly have to be in common use today, otherwise the dictionaries will dispose of them sooner or later. 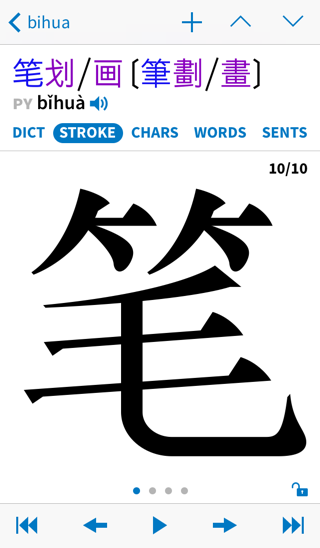 The fact is that for some characters, a simplified and traditional form are shown, although they were not part of the 1964 reform. So I wonder, which source does Pleco use for them?

You're welcome! The sources Pleco uses are simply the individual dictionary makers. So we'd have to ask them.
S

that's a good point. While I'm not up to date on whether in Taiwan or Hong Kong, 决 is now being used exclusively instead of 決, I can see that about 14 of my dictionaries all agree that one can write either 决 or 決 in Traditional. So both forms seem to be acceptable in Traditional. The dictionaries say:

I am running android ver 3.2.64 and cannot seem to get then "-"-ed display format ( 决 （決/-）even with "w/dashes" mode selected. Is the above version or platform dependent? I do not have a Setting sequence as described above. I have Settings->Language > Headword [set to "Both w/dashes for duplicates"]. For what platform and version is your reply applicable and how do I set this in my android/version?

Staff member
It works identically across platforms and hasn't changed in quite a few versions. But it might vary based on your dictionary selection - what are you seeing instead of that format?
S

Perhaps I am looking at something different. Specifically, I close and restart Pleco. I draw the character 决 and select done. An ABC dictionary entry summary shows now on the screen as 决 [決]. I select this entry and bring up the full screen and the head characters are the same 决 [決]. If make a flash card it shows just 决 as the head word. Under Language I do not have "Traditional Characters" selected. If I select "Traditional Characters" the flash card is exactly the same. I find this all very confusing.

Staff member
Check New Test / Display, in flashcards - is “force character set” on and the character set set to “simp-only”? Turn that option off and that should fix this.
S

I did that and I changed to the OCC dictionary. Now if I draw the 决 and select done the OCC entry shows 决 [決/-] {Yea!) BUT I click on that and bring up the full screen and the headword show 决 [決] as does the Flashcard created from that entry! Furthermore the the chars screen shows 決 as being in the "Opposite Character Set"

Staff member
Flashcards only show a single headword without variants, by design (reduces confusion, at least that’s the intent - better to learn just one character at a time).
S

OK No problem. I was just more curious about the differences among systems and versions. I don't tend to use flashcards much. I read a lot and know whether I am reading Traditional or Simplified Dictionary look up does a good enuf job of id'ing variants for me. Thanks for the help!
You must log in or register to reply here.
Share:
Facebook Twitter Reddit Pinterest Tumblr WhatsApp Email Link
Top