Feature Request, support for "next" button via external keyboards

I have an external keyboard (Logitech K480) that I like to use while taking flashcard tests in Pleco. The keyboard works pretty well overall but if there was some way of selecting the "Next Card" button via my keyboard and without having to touch the screen of my phone it would make the experience of taking flashcard tests much better for me. Maybe the enter, space or right arrow keys? Maybe this is possible already via some key I haven't tried? Thanks! 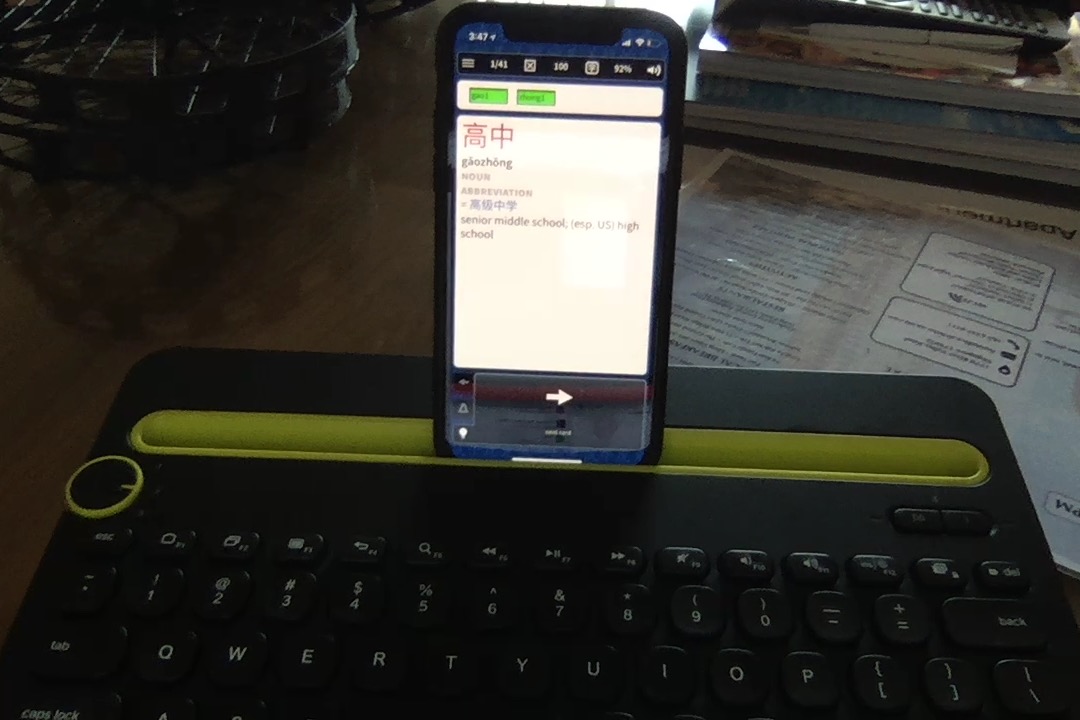 "enter" key would definitely be the best I think

Staff member
Makes sense, though it’s not a scenario we’ve had a lot of requests for - thanks.

Consider this another request then. I'd love to use the external keyboard with pleco more often than I do - especially with the ipad. As it is, I can't really.

(unless it holds up the release of v4 - in which case, shelve it for now)

Consider me another requester. Since Apple already supports keyboards where they can (for things like Copy and Paste and Undo), I feel Pleco should, too. Also, the fact that there weren't many requests so far doesn't necessarily mean that users wouldn't want a new feature. Sometimes they will love something they didn't know they wanted, because they will only know it when they can try it.

On the implementation: I think Pleco could use the number keys 1, 2, 3, and so on to support pressing the buttons from left to right (like Anki does on PC/Mac) or top to bottom, perhaps the Tab key for jumping between different blanks in Fill-in-the-blanks tests (it might already support that), and the Enter key to confirm the blanks. For Tone Practice, just pressing keys 1-5 (or 6 for Cantonese) should be enough to go the next blank/question and perhaps the backspace key to re-activate the previous syllable.

But of course, mine is just one of many opinions. I wouldn't be disappointed if you were to make a different decision—it's always the programmer who decides.
Last edited: Sep 15, 2018

Staff member
Thanks. If we did do this I expect we'd use a flexible mapping, perhaps one that could even theoretically also support MFi game controllers for people who want to use those.
A

Any update on flexible mapping for external keyboards?

Staff member
Added for 4.0, though I'd still call it 'tentative' at the moment since the next releases of iOS / Catalyst or other software changes accompanying the arrival of official iPad keyboard support + ARM Macs could change things enough that we end up removing it until we can retool it to deal with those changes.
You must log in or register to reply here.
Share:
Facebook Twitter Reddit Pinterest Tumblr WhatsApp Email Link
Top